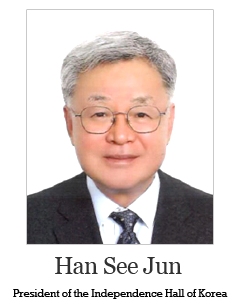 Welcome to the Independence Hall which is the living spirit of the Korean nation.

It has been a hundred years since the Japanese imperialist stole our sovereignty and it has been sixty years since we regained our independence Korea began as an extremely poor country but, even though Korea is a comparatively small country, we became a global economic power.

This is a miracle in world history. To this date, no other people or country has accomplished anything like what has happened in Korea. The proud spirit and soul of the Korean people who made that miracle is present in the Independence Hall. We will remember the numerous patriots who willingly died for Korea’s independence and we continue to work hard on their behalf for national progress and for world peace.

In the Independence Hall, please feel the spirit of the Korean people who love freedom and peace. And please enjoy the beautiful forest and nature that is here. Thank you.