After the Paleolith culture in the Korean peninsula 500,000 years ago, Korea developed its independent culture through its various histories through the Neolithic and the Bronze Age. Despite various foreign invasions, it wisely overcame the national crisis and experienced beautiful cultural blossoms.

This exhibition hall displays artifacts and data related to the efforts to overcome national crisis, impregnable spirit, traditional culture and roots of the nation from the prehistoric age to the late Joseon Dynasty in 1860. 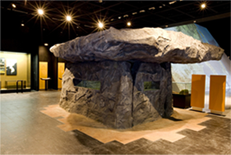 Dolmen is a Bronze Age tomb made up of giant stones. As its ruins, many stone daggers, arrowheads and bronze daggers are excavated. Korean peninsula is the world’s largest aggregated region of Dolmens, holding 40% of Dolmens of entire world, and Korean Dolmens were designated as UNESCO World Heritage in 2000

Representative relic which shows the relationship between Baekje and Japan.

It is said to have been granted by the king of Baekje to Japanese royal family. 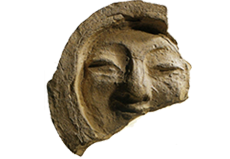 Roof-end Tile with Human-face Design with natural and slight smile, eyes softly closed. On the backside, there is a trace of actual use in the building. 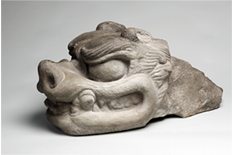 It was a kind of decoration inserted in stylobates of buildings, and many pieces of Dragon Heads were excavated from castle sites of Balhae including Sanggyungsung. It assumes the appearance of holy dragon preventing evil spirits. 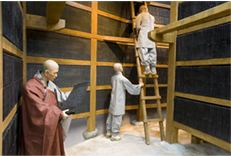 Goryeo made ‘Tripitaka Koreana’ for the purpose of saving the country from foreign powers invasion through Buddhism. Storage Hall of Tripitaka Koreana is a scientific building with natural ventilation and adjustment of temperature and humidity. (National Treasure No. 52)

Annals of the Joseon Dynasty / Joseon

A book in which history of 472 years of the Joseon Dynasty was recorded from the first King Taejo to 25th King Cheoljong.
All areas such as politics, society and culture are recorded in this book. (National Treasure No.151) 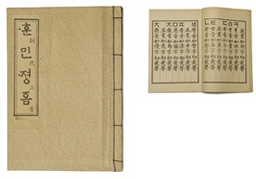 A manual distributed to Korean People after creation of Hunminjeongeum, which shows the interpretation of Hangeul (Korean Alphabet) and its usage following the introduction written by King Sejong the Great. (National Treasure No. 70) 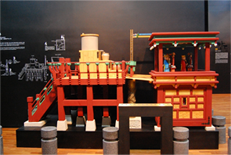 ‘Jagyeokru’ is a water clock created by Jang, Yeong-sil in 1434, which made the bell, gong and drum automatically produce the sound at fixed time.
Re-created Jagyeokru is a model reduced by half on the basis of re-manufactured model of 1536. (National Treasure No.229) 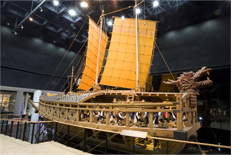 Joseon’s Ironclad Warship which led Korea to victory during Japanese invasion to Korea in 1592.

It is a re-created model of war situation, reduced by 1/2.5 on the basis of turtle ship used in King Jeongjo period of Joseon Dynasty.