The 5th exhibition hall, ‘Patriotic Struggle for National Independence,’ covers the anti-Japanese armed resistance which occurred in areas inside and outside the nation to obtain national independence.

You can view the armed independence activities in the Manjuria region, just resistance which executed major figures of the Japanese institutions, and the activities of Joseon Uiyongdae and the Korean National Independence Army. 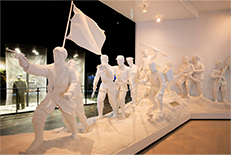 This group was sculptured to reproduce the struggling scene of unknown Independence Army soldiers in order to commemorate their patriotism and their struggle and sacrifice to fight Japanese forces in backwoods of Manchuria and Maritime Province of Siberia solely for the independence of Korea. 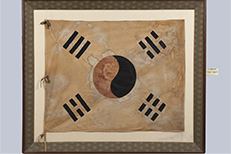 This Taegukgi was known to be used in the Independence Army force during Fengwutung battle in June, 1920.

The Scene of the War of Independence 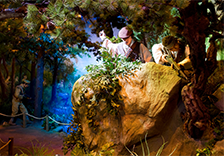 This scene reproduced the scene that the Independence Army around Manchuria, China formed an armed independence army forces to conduct military operations against Japanese forces. 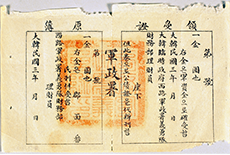 This receipt was issued to a person who supported the fund for the independence movement by Western Route Army. 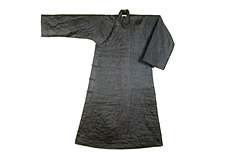 The Declaration of Joseon Revolution / 1923 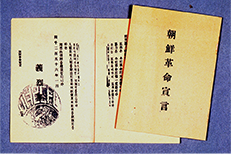 In January 1923, the Declaration of Joseon Revolution was written by Sin, Chae-ho and proclaimed by Righteous Patriots Corps is an independence movement league established by Kim, Won-bong and others in Jilin, Manchuria. 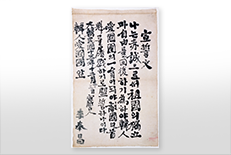 Yi, Bong-chang wrote this oath before he took off to Tokyo for punishing the King of Japan, when he joined the Korean Patriot Society.

The scene of Yun, Bong-gil throwing bomb to the Japanese leaders 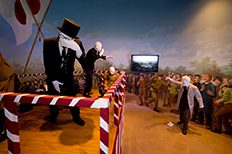 In 29 Apr 1932, Yun, Bong-gil carried out a bombing attack in Hongkou Park, Shanghai during the celebration of Emperor’s Birthday and Shanghai incident to punish Japanese leaders.

A Taegeukgi Containing the Signatures of the Korean Restoration Army 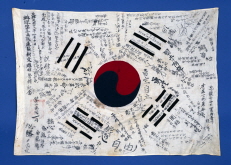 Moon, Soo-yeol, who was a soldier in the Korean Restoration Army received this Taegukgi from his colleague Lee, Jeong-soo around February, 1945. His wish for the complete independence of Korea is written on the Taegukgi. (Registered Cultural Heritage No.389)