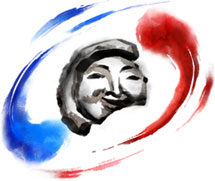 The stage where Korean history took place was Manchuria and the Korean peninsula.

The Paleolithic Era in Korean history traces back to about 500,000 years. Archaeological findings suggest that the Korean nation was formed by the mingling of the northern nomadic tribes and the southern agricultural people, and the ancestors of present-day Koreans appeared in the Upper Paleolithic Era (10,000-40,000 years ago). Around 10th century BCE with the advent of the Bronze Age, they formed the first tribal nation of Gojoseon.

Since the late 19th century, internally Korea had striven to do away with its pre-modern societal structure to achieve self-modernization while externally resisting invasions from imperial foreign powers, starting with Japan’s.

From 1880 onward, the government had promoted modernization policies in earnest. The 1890s saw the development of the populist Donghak (Eastern Learning) Movement in the countryside and the Independence Club campaign for democratic enlightenment in the cities. The assassination of Empress Myeongsong in 1895 in particular by Japanese headed by the Japanese legation minister Miura Goro brought the rise of righteous armies nationwide against Japanese incursion. Also, an intellectual-based modern education and enlightenment movement was waged. This time period falls under the Korean Empire established by King Gojong. In 1897, King Gojong established the Korean Empire and pushed modernization policies based on strengthening his imperial power while pursuing a neutrality policy to seek a balance of power among the foreign nations. In terms of results, however, these modernization movements and policies could not stop the invasion policies employed by Japan which had emerged as an imperialist power in East Asia from its victories in the Sino-Japanese and Russo-Japanese wars.

Although the righteous armies struggled fiercely and intellectuals indignant at their country’s fate committed suicide in martyrdom one after another, the Korean Empire fell at last in 1910 and began the walk on the road of Japanese colonization.

However, with the collapse of the dynasty unfolded the age of the ‘New People.’ From 1910 to 1945, the populace and intellectuals were the principal agents of the Korean independence movement. Independence activists crossed borders and went into exile in China, Russia, and the United States, establishing bases for national independence. There, they waged armed and diplomatic struggles despite the elaborate inspection and surveillance networks utilized by the Japanese colonial authorities. In the process, many activists were arrested and imprisoned.

In particular, during the Independence Movement that started in Seoul on March 1st, 1919 and spread throughout the country, young students took out the Taegeuk flags they had drawn and shouted ‘Long Live Korean Independence!’ Fearing a crisis, the Japanese colonial authorities mobilized the troops and armed police, arresting and slaughtering civilians. Such atrocities under the Japanese Empire continued in the massacre of innocent Koreans during the 1923 Great Kanto Earthquake. 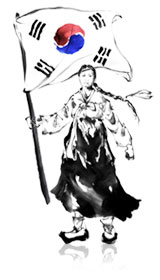 In 1919, independence activists in exile established the first Provisional Government of the Republic of Korea in Shanghai, China. The Provisional Government carried the banner for democratic republicanism as the representative organization of the Korean people and as the leading organization of the independence movement. Despite Japanese discriminatory policies, the Korean people, learning and preserving their history and language, at times struck decisive blows at the Japanese ruling apparatus via armed struggle.

The course of these trials and resistance strengthened the capabilities of Koreans, which served in establishing the Republic of Korea after 1945. On August 15, 1948, the Republic of Korea succeeded the Provisional Government in Shanghai, China and declared itself into being, taking its first step as an independent democracy. 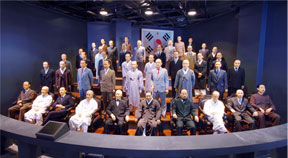 Afterwards, South Korea suffered massive loss of life and economic damage from the Korean War. However, the Koreans achieved remarkable economic growth with the so-called ‘Miracle of the Han River’ from the war ruins, and established a democratic society through the power of its citizens. These successes were possible because of the dynamism of the Korean people in overcoming national crises in addition to their democratic activism and desire for national modernization.

The Republic of Korea has made contributions to the harmony of mankind and world peace by successfully hosting two major international sporting events: the 1988 Seoul Olympic Games and co-hosting the 2002 FIFA World Cup with Japan. As a UN member state, Korea, striving to ease international tension, plays a leading role in famine relief and refugee aid for global mutual prosperity and coexistence.